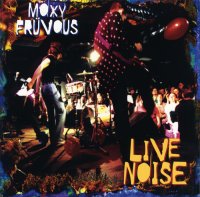 In the future, what we think of today as a "live album" will actually be a human-interface computer chip that plugs directly into the brain. The purchasers of such a "live album" will experience the "live show" through all five senses, not just one, and the bonus tracks won't be songs but genuine road experiences like "Smell of the Van, Week Four", "Hacky-Sack with the Guys", and "Hotel Wake-Up Call!" But that sort of technology is years, perhaps even a decade away, so until then the live experience will have to be crammed into your brain through your ears. To compensate, we've tried to fill this album with all the spit and sweat, all the Rocky-Horror-vaudeville-glam-folk, all the witty asides and broken strings that is a Fruvous show.

This album is a snapshot of that show, Autumn '97. We selected performances from the middle of a mostly stateside tour that took us from Maine to Manitoba to Missouri to Georgia and just about every metropolis inside that polygon. The album is not as long as a Fruvous show, but we've tried to include every aspect of our multifarious band personality. We've included several snippets of between-song banter from those shows, because the banter is as integral to our shows as the music, and for many repeat viewers of Fruvous it IS the show.

Many of the songs on this album are staples of our live show, but there are also a few included here because they took on a new life after they were originally recorded - like young hockey players, they bloomed into fine two-way defensemen after a disappointing rookie year. Much of the banter here takes its cue from the road experiences of the day, from a Trivial Pursuit card in Providence inspiring an improvised quiz-song about geographical elevations to the distinctly cortex-heavy ambiance of an afternoon's stroll at M.I.T. engendering an on-stage squabble that night about chess-playing supercomputers.

In addition to the local crews at each and every venue, we would be officially Nowheresville without the purple heart heroics of our own carry-along 2 Live Crew. On logistics, merchandise, ninety-eight per cent of the driving and assorted grunt work, the inimitable (despite constant attempts) Marcus Tamm. Providing us with Fantastic Live Sound, working equipment and the occasional shot of sour mash, Colin "Cal" Stanutz. Because of these two we are alive and relatively sane, to them we proffer our eternal thanks and dedicate this live collection. Our thanks as well to tour comrades of the past: John Shotwell and Peter Arseneau, merch fellows Brain "Dookie" Corbett and Chris "Blakey" Blake, and all the others who've endured life in the van with us to ensure that the show goes on.

You're heard it all before and it's all true: life on the road is often a drag. The highway food, the living unglued, the hotel grind, the losing your mind. Being miles away from loved ones is cruel and, for us, quite usual punishment. But we do get to PLAY, for some of the most enthusiastic fans a band could hope for, and that's amazing. Now we get to take home some snapshots. And so do you. Hope you enjoy.


Art Direction, Design & Layout by A Man Called Wrycraft, Toronto
Photography by Lisa Pollock with gracious thanks for additional photos from fans and friends

Misc. Info about this release

The bulk of this album's content was culled from Fruvous' recording of six shows from the 'Your New Boyfriend' tour in fall 1997. The shows that were recorded are as follows:

Also, some miscealleous bits were taken from the following two shows:

Look for scanned Live Noise pictures in the picture gallery.

For press releases, newspaper articles, and the like, check out the news section.

According to Michael Wrycraft (the artist for the album), the font used for 'Live Noise' is called 'Walkie Talkie'. (this little nugget of info was revealed at FruCon 2)

The font can be downloaded directly from FDC or acquired at: http://www.fontfreak.com/fonts-w.htm.

This is a scanned Trivial Pursuit game card (from the Genus Edition). Note the Geography question:

Front of Card | Back of Card

Thanks for the great addition to the 'Live Noise' information page, Chris!

This and other Moxy Früvous releases are available online. Check out the following sites: